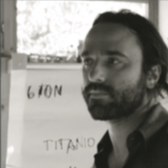 After graduating from the State Art Institute Silvio d’Amico, with specialization photography, he began working as a freelance photographer and editor. Since 2003 he begins to deal with production and direction and, with his company, with commercial production and post-production of the music channels Fastweb platform. The work of producer continues over the years, alongside social commitment and politician with Zero – Investigation on 09/11, the film became a symbol of the struggle for truth about 09/11 and with Sangue e cemento, the first documentary on the Abruzzo’s earthquake produced and directed by Torelli.

Last year he wrote and directed the documentary Un altro mondo and he’s currently working on a new project entitled Serial Killer, a documentary on the environmental, cultural and human on the meat.